To the highest bridge in the world – at Millau, France!
Beers in the garden, apéritifs in the wine cellar, hic…

Before you can say “who’s round is it” five of us are ready for ‘MotoGastro’ to the highest bridge in the world – the Millau Viaduct! At 2.4km long and 270m above the river at its highest point, the Millau viaduct spans a 2km valley in the Massif Central mountain range and cost €400m.

We’re leaving the UK from Hull, it’s way cheaper than North Shields, but as the five of us haven’t been together for years, there’s a good chance we will not be capable of riding anything after the bar opens on the ferry… 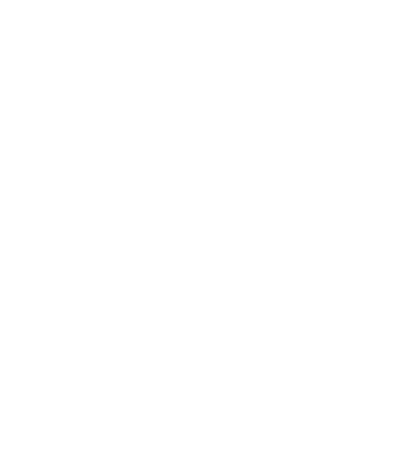 A tad fuzzy in Zeebrugge we try to avoid motorways where possible, but we’re often split-up in traffic, crossings and in towns so keeping the pack together is like herding cats. Hangovers do not help.

We’re meeting Steve in Calais, but there’s no sign of him. Without a mobile enabled for Europe, we can’t get in touch, so aim Rouen. Eventually, Steve’s phone becomes Europe friendly, he texts us “at Tours”. We’re 175 miles north, WTF? We take Etap style accom tonight, jump on the nearest bus as ask the driver to stop at the first restaurant. Food, drink. Parfait!

The next day we meet up with Steve close to Chartres, he only rides at one speed – max. Within a few hours it’s becoming obvious that Steve is up for 800 miles day and us lot are making more like 200. Nevertheless, the sun is out and we make it south of Orleans, (Salbris). Accommodation is scarce, but we find a hotel sign on the side of the road “La Sauldraie”.

The entire evening is spent outside in the sun eating, drinking, eating more, drinking more, laughing and chatting. By sun down we’re full up after 5 courses and shed-load of beer. A superb social night, but the next day we wake to a hotel bill of over 500 Euros. Oh, B’Jesus.

We stick to the more scenic ‘N’ roads as we head South towards Millau the next day, roads are good and the sun is out.

Millau is about 100 miles away we’ve got to lamp-it to get there for early afternoon to make the most of it. So far so good until the Sat Nav takes us off piste for petrol, no sign of Steve in our mirrors but sure enough we find him refuelling 30 minutes on, we’re all back on the road to Millau – now only 20 miles away.

As we ride to Millau we can see the bridge in the distance, even from 5 miles away it looks amazing. Before you know it, we’re paying our 3.50 euros each to cross. The bridge sits 1/4 of a mile in the sky, you’d expect the views to be stunning, but the high sides to stop the crosswinds restrict this. Actual construction is damn impressive, those towering steel cables and support beams are a marvel of engineering. The French may have built this, but it took an Norman Foster to design it. 1 – 0 to the UK.

We are all happy we made this destination. The road into Millau town is great, really twisty with magic views as you descend, we find a cafe and park up for Expressos, the rather nice owner phones a local hotel. Right then, parked up, jeans on it’s time for beer! Millau is an excellent town, it’s larger than most but with lots of bars and restaurants this is the way to see France. Mark my words, get a hotel early and make sure you eat and beer-up ASAP – you’re screwed after 11pm. 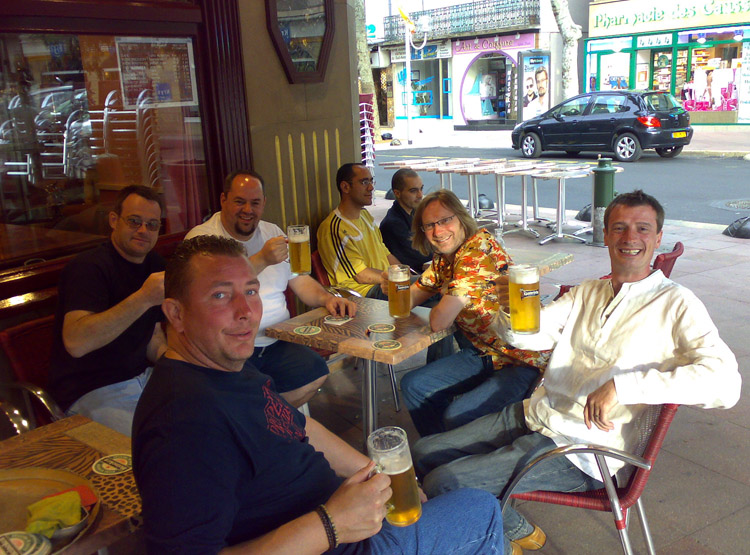 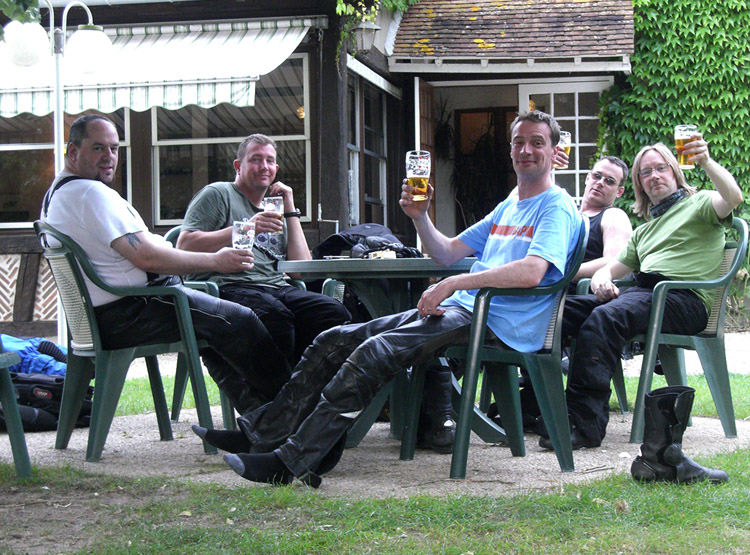 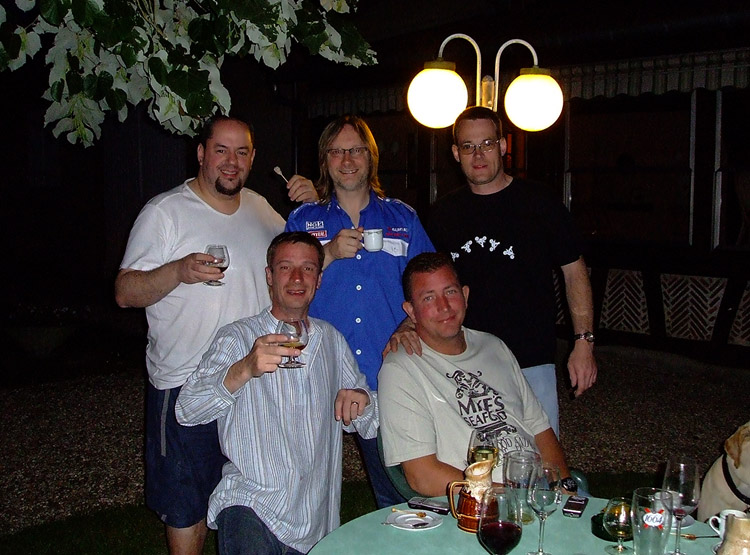 The evening closes at La Sauldraie 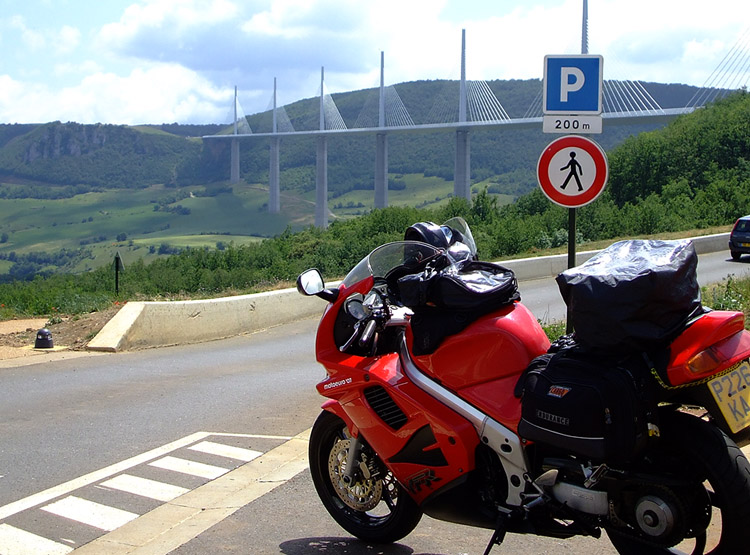 We reach the Millau Bridge 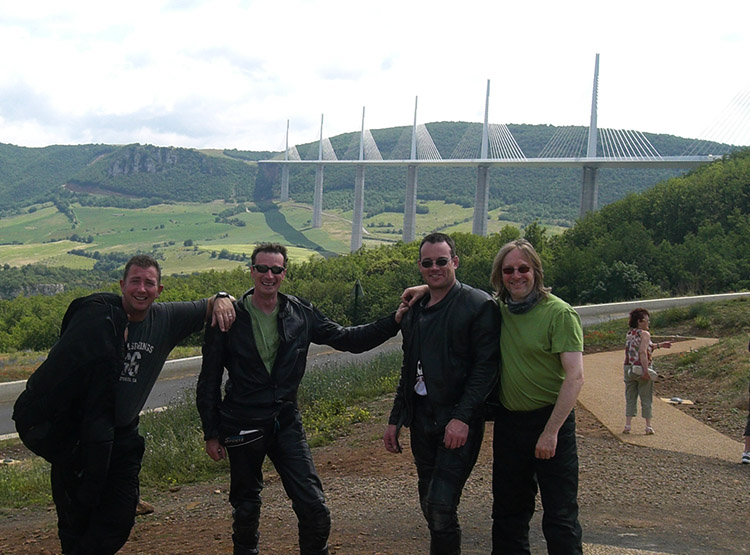 Black and green are the 'in-colours' 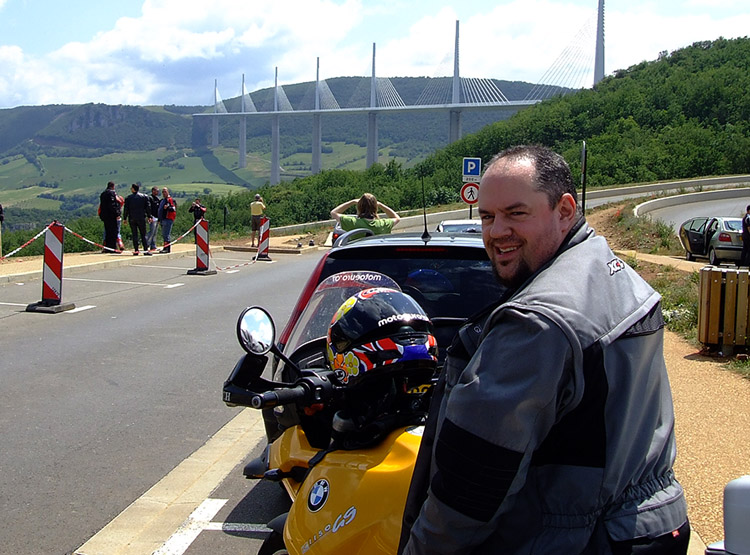 Stevie at the Millau Bridge 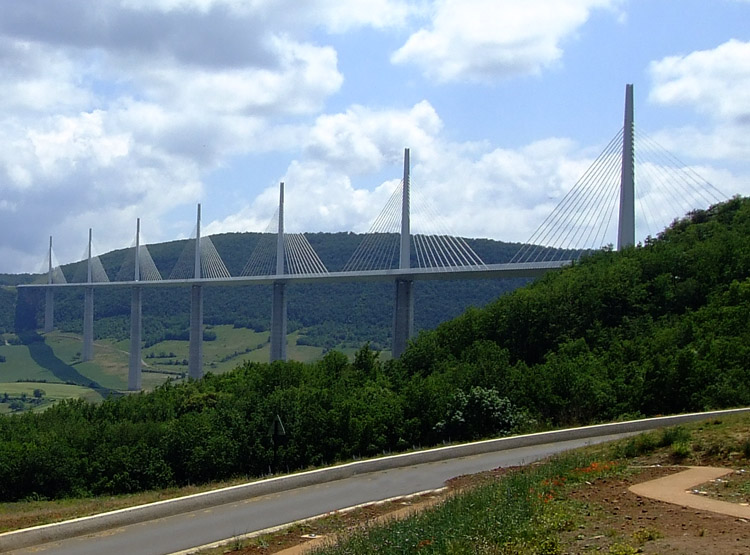 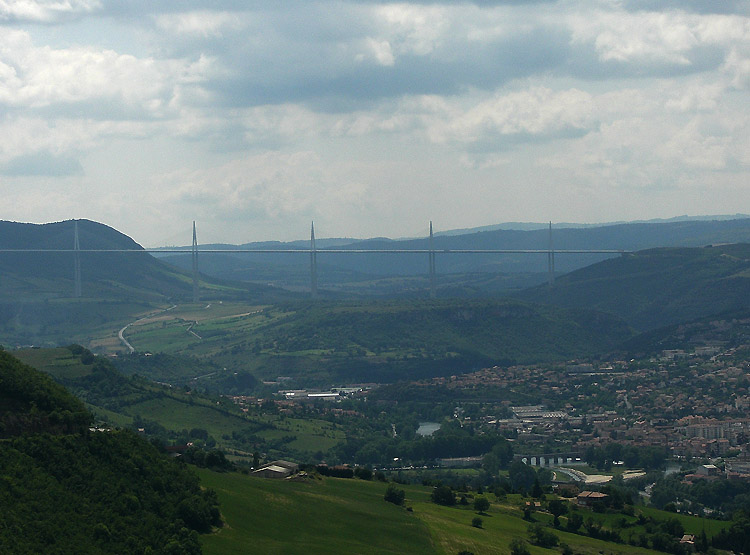 Considered one of the greatest engineering achievements of modern times 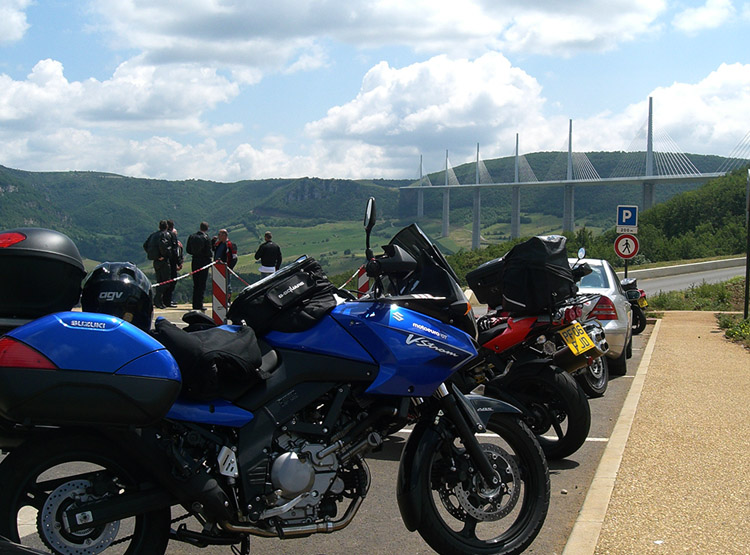 One of many viewing areas

Leaving Millau we fuel up on N roads to Le Puy-en-Velay. Unable to control himself, Steve hits light-speed again and that’s the last we see of him.

We get a text to say he’s on route to Le Puy and will meet us there. Wicked rain arrives, we’ve got as much grip as a wet fish in olive oil. All I can see are my crappy fabric panniers with no covers getting drenched from a cafe. But with so many miles to go we must press-on. Mark’s Nav takes us on some very odd roads through the hills but as the rain fairs up these turn out to be the best roads yet on Motoeuro. We wind our way through the hills and past viaducts, vineyards, rivers and the most spectacular scenery, we’re dry now and the sun is out, you couldn’t wipe the smile of our faces if you tried.

Steve is in Le Puy-en-Velay at an Ibis hotel, we end up at an Etap. Luckily, they are only 500 yards apart. However, an hour later, no Steve. We get a text to say he’s riding back home to the UK – pressures of life are getting to him. We’re all disappointed for Steve.

We have more than our fair share of beer tonight and wake to a delicious French breakfast – dry, cold toast and dehydrated bread that makes your teeth ache. Yum.

We’re ride towards Lyon and then Dijon. We must put in about 200+ miles today if we’ve a chance of getting back in time. Somewhere near 260 miles we pull in at Parcey (just shy of Dijon on the A39). Parcey is situated in the Jura (Franche-Comte region) in the east of France at 39 km from Lons-le-Saunier, the department capital.

We stop at the Parcey Hotel, right by the river – perfik! The owner invites us to put our bikes in his garage overnight. We hit the Leffe Beer, grab a seat outside in the sun and in no time the team are talking bollox and laughing at anything.

Cooking is a national hobby in France, if you get the option stay in a private hotel, pension or Logis, the food is always excellent. Our hosts are just a regular couple who own a small hotel – our food was superb and after wine, we’re goosed by 11pm.

We aim for Luxembourg today as it would be a crime to miss out on cheap fuel. We head for the motorways and take the toll costs on the chin. 70+ miles and we’re only a few miles from the border and the rain came – angry rain. Roads were flooding as we ride.

Refuelled and re-coffeed we press on knackered as the concentration needed to survive this mad place is intense. A local points us in the direction of a cheap hotel, but within two turns we’d lost it, the rain and wet roads aren’t helping – we need rest and beer.

Sat Nav to the rescue as Mark finds a fantastic old hunting lodge on the edge of a forest, two rooms please and we’ll take our apéritifs in the wine cellar. Pewter jugs of cold beer were served and after Marky had deciphered the menu, we took the time to reflect on a mad, mad day of riding. Sun, rain, thunder, lightning, humidity – we’ve had it all today. Checking my phone Steve made it back by 10am the same morning – 700+ miles in 16 hours, doesn’t sound like great fun but he’s safe.

Our evening meal was the best so far and believe me we’re had some fantastic food. We have found heaven and it’s called Hotel Barriere in Belgium of all Places. Motoeuro? More like MotoGastro this year 🙂 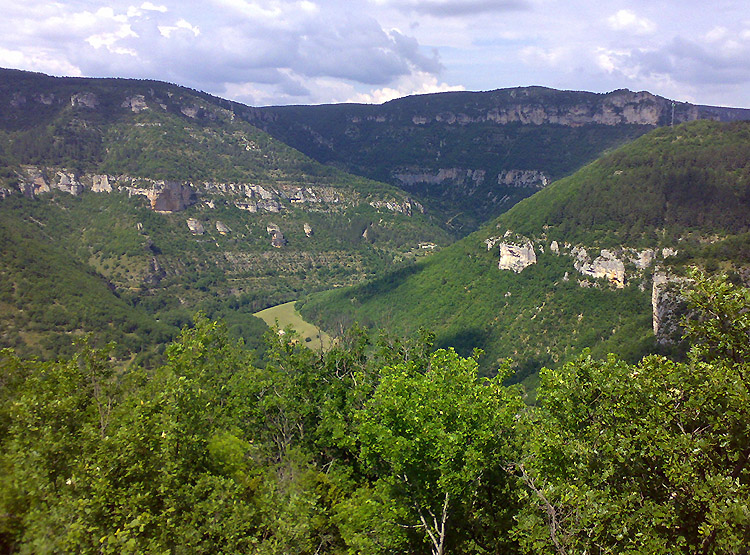 France is a bikers dream 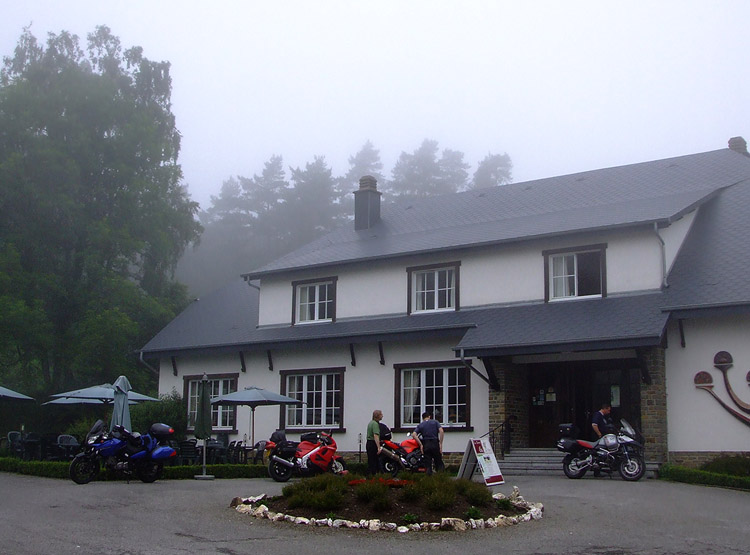 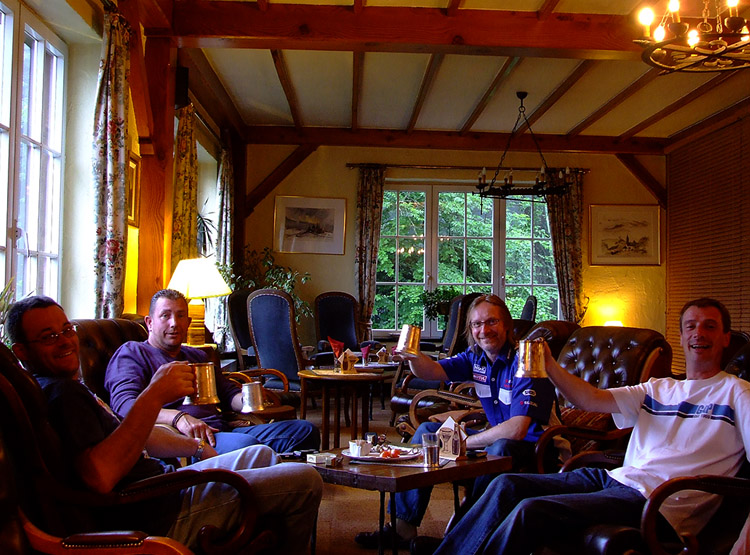 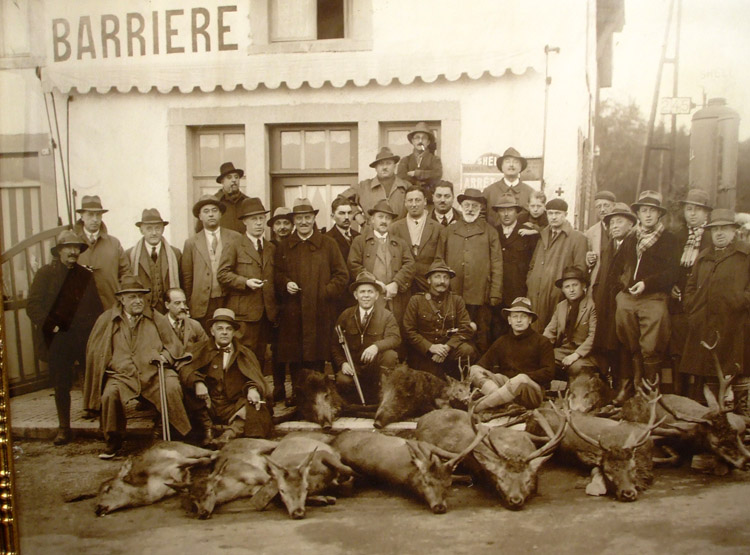 The old days of this hunting lodge 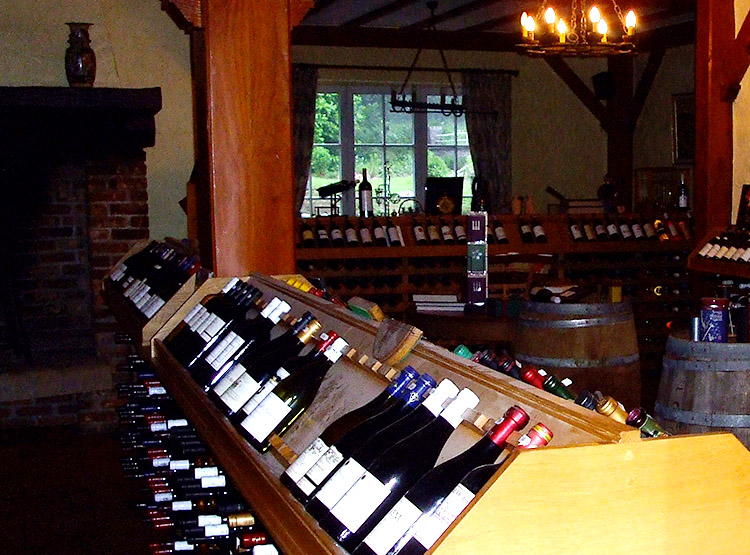 Our wine cellar for the night... 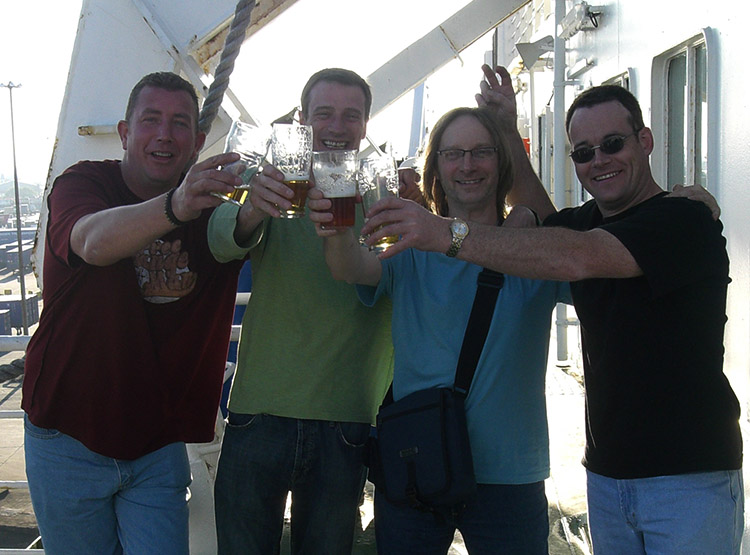 It’s really misty the next day as we ride through the forest, pick up the motorway to Brugge. We’ve got an hour to find emergency gifts then off to the ferry. Herded on first before the cars, we secure our bikes. Last evening on the beer so let’s make the most of it. Geordie and Mark can’t resist the 3 foot long Toblerone bars in the gift shop then it’s time for enthusiastic clapping and cheering at the live band. More beer, Brandy? Go on then. Another pint anyone?….. Oh lordy.

150 miles back to Tyneside, time to go our separate ways. It’s been a blast, happy days! MotoGasto – Anyone got a Rennie?

Five riders were always tricky to manage, easy to get split-up and with different habits, some would stop for snacks or cigarettes while others wanted to march on.

Okay, we should have all had the route with pre-planned meet up points or even accom booked in advance – But we literally fell off the ferry and made it up!

The Millau Viaduct is incredible, now with extra viewing areas and facilities I would encourage anyone to visit. With traffic bypassing the large town of Millau, accom and restaurants are cheap with much availability.

As ever, five mates away predictably hit the beer a little too much – But we achieved our goal and discovered good roads, great venues, had such a laugh and rode over the tallest bridge in the world. Not bad at all! 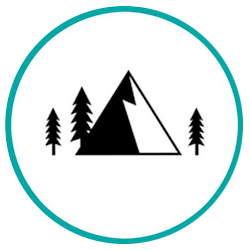